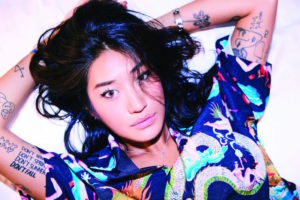 We have dished out some stick recently. That’s true. It is easy to get carried away with some of the more sensationalised stories that abound in dance music circles, although we don’t do that at Ibiza Voice. Amidst the constant threat of club closures, in-fighting about what genres are acceptable, arguing about track IDs, ghost production or how much money is or isn’t earned from streaming services, we never want to forget the power of electronic music as a force for good. And we are going to strive this year to put out as much positivity as humanly possible.

Therefore, we asked Kristan Caryl to give us a few reasons to feel good about 2018. Here’s what he told us

We aren’t there yet, but the last year or so has seen real change afoot when it comes to diversifying line-ups. No longer is it just super-woke London liberals making noise on this issue, but regular club goers seem to have come round to the fact that we need more women in dance music. There are major campaigns with huge financial backing such as Smirnoff’s Equalizing Music, but also stories of DJs such as Objekt refusing to play parties without any women on the line-up . With the likes of The Black Madonna, Nina Kraviz, Peggy Gou and Honey Dijon all now sharing the high profile of some of their male counterparts, things can only get better as we go forwards.

There is always plenty of new music to get excited about, whatever your own personal preference. But news of a first album in 25 years from a pioneering figure as vital as Larry Heard, aka Mr Fingers, is truly heart stopping. Called ‘Cerebral Hemispheres’ and due April 13, the album comes after a brace of brilliant Mr Fingers EPs last year and finds the Alleviated label boss exploring “shimmering ambiance, deep soul and psychotropic electronics.” The countdown has begun…

Though streaming sites have not yet proved themselves to be suitable replacements for the sale of physical product if artists want to make money, Bandcamp’s model certainly has. In their recent year end report, the artist led platform reported that in 2017 “digital album sales were up 16%, tracks 33%, and merch 36%. Physical sales was led by vinyl (up 54%), CDs (up 18%), and cassettes (up 41%).” As such, they have now paid out more than $270 million to artists for their music, which is only a good thing.

Despite what reoccurring stories everywhere from the BBC to The Guardian will tell you, club land is not in decline. Sure, there are constant battles with the authorities—and an on going need to make clubs as safe as possible when it comes to drug use—but the arrival of new venues such as Printworks and E1 prove there is plenty of life in the underground. Between them, these places are hosting huge parties, innovative showcases and marathon raves that are selling out each and every time.

On a more intimate tip, there are the likes of the Lion and Lamb, which has regular nights programmed by Craig Richards, the 200 capacity Pickle Factory (part of Oval Space) and Cell 200 in the depths of Kings Cross with a beefy Funktion One sound system, all of which have somewhat taken the baton from still sorely missed places like T Bar and Plastic People.

No longer can music venues be closed or slapped with draconian volume caps if locals complain about noise. Instead, the onus will now be on housing developers to protect both music venues and their neighbours with whatever measures are necessary. It’s a big victory that will protect our most cherished live music and club spaces.