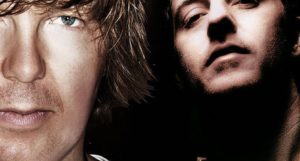 Sasha & John Digweed have announced that they will headline a show in Belfast’s Custom House Square on August 18th as part of their RESISTANCE world tour.

The widely respected progressive house duo will be joined by and Nic Fanciulli and Psycatron on the night. The pair reunited at The Social Festival 2016 after a six year break during which they persued solo work. Since, they have been as in-demand and as innovative as ever. In 2017, they had their own RESISTANCE residency in the iconic Privilege venue in Ibiza. The former DJ Mag Ibiza cover stars also embarked on their RESISTANCE world tour with Ultra last year, playing at festivals like Glastonbury, Kappa Futur Festival (Turin) and Veld Music Festival (Toronto).

Tickets for their show in Belfast will go on sale this Friday February 9th at 9am GMT via Ticketmaster.

It’s shaping up to be a pretty amazing summer for dance music in Belfast with AVA festival and conference’s line-up for June also looking superb.

To give yourself an idea of just how special a gig this will be, read our 11 moments that defined Sasha & John Digweed here.

Watch Sasha DJ at the DJ Mag Last Night On Earth takeover 2014 below.