Why San An’s 3am Club Ban Is Madness

Why San An’s 3am Club Ban Is Madness 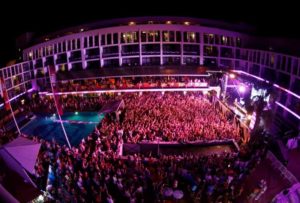 Why Ibiza needs to get real about clubs and lead from the front in integrating nightlife with its local communities.

Ibiza is yet again making headline news around the world. The current story burning through worldwide status updates concerns plans to close clubs and bars in San Antonio’s West End at 3am. “Party Til Dawn? Not Any More,” reads one particularly hasty headline in the Daily Mail while EDMTunes brashley declares: “Ibiza to Ban Clubs from Staying Open Beyond 3am.”

Before the clickbait stories get really out of hand, let’s be clear on what’s actually happening. The council are proposing closing all premises in San Antonio’s West End at 3am and ordering hotel and bar terraces with music to finish at 11pm after a survey proved that noise levels in the area had exceeded the recommended guidelines.

Councellor Pablo Valdés argued in an article in the Diario de Ibiza that levels of “90 and 95 decibels were recorded, which is equivalent to having a train next to the bed.”

Contrary to the alarmist headlines, the restrictions do not apply to other areas of Ibiza or even to San Antonio’s most well known superclub Eden and live music hotel, Ibiza Rocks.

The proposals also recommend that businesses must also be soundproofed with double doors and ventilated according to new guidelines and that sound limiters must be connected in real time with Town Hall, to allow the government to monitor sound levels.

While not quite ‘THE END OF IBIZA,’ the news does regurgitate the same old debates that have been raging on the island for some time.

In one camp are the clubbers and music industry who arrive each year en masse for a holiday or another season of music and hedonism. In another are the ever increasing number of developers opening bars and hotels that all vie with each to be loudest. And somewhere in the middle are the local who each year complain about excessive noise levels and tourists.

It is a situation reminiscent of a warring family as one member cannot live without the other yet all three constantly bicker over what the identity of the island really constitutes.

At Ibiza Voice we are of course pledged to the side of the clubber and local music industry. That said, we also agree that clubs and tourists should not be given carte blanche to be as loud as they want, whenever and wherever they like.

But the island needs to remember that in recent decades its two major touristic cash cows are clubbers and families, two sources of income that it seems hellbent on turning away.

Remember a time when Ibiza was the centre of the dance music universe? We seem to be moving further and further from that idea in 2017 and in order to stop the rot, the council and the island’s music industry need to work together to ensure the island remains one of the world’s most culturally valuable musical places.

Ibiza should be leading the world in demonstrating how clubs should integrate with local life yet year after year, the same arguments regurgitate with little progress in keeping any members of Ibiza’s warring family happy.

It is essential that the island’s locals and government officials come to terms with the fact that clubs and parties are an invaluable resource on the island.

It is essential that certain areas of the island that have for decades been seen as areas known for loud music late at night, be allowed to remain open at night time.

If you turn away late night noisemakers in San An’s West End, they will not simply go to bed and call it a night. The local council is inviting upon itself a situation where every area of the town is kept up past six am as tourists, continue the party back at their hotels, apartments or on public streets.

Many modern European cities keep the delicate balance of nightlife and normality by deeming certain areas as late night zones. Surely a more common sense approach is accepting that these small areas of a city, such as San Antonio’s West End act as a magnet for party people and therefore ensure that a greater number of residents elsewhere can sleep undisturbed.

Berlin made headlines recently when plans by the government to invest €1 million in soundproofing clubs and venues were announced. Rather than give way to the property developers, councillors there have instead accepted the hugely essential role that clubbing tourist plays in the city’s economy.

Given its close connection to dance music over the past few decades, shouldn’t Ibiza be leading from the front with initiatives like this, particularly considering the insane amounts of money generated by its super clubs and associated industries each Summer?

Instead, we have the same old, same old. In October, local newspaper, Diario de Ibiza also ran a story about DC10 being charged by local police for exceeding noise restrictions for their closing party.

DC10 is one of the main reasons nightclubbing tourists come to the island. It is situated next to an airport for the exact reason that it is probably the island’s safest place to make noise, given the excessive noise levels created by its nearest neighbour.

If DC10 can’t remain open while based next to an airport, there is something very seriously wrong with the decisions being made by local government.