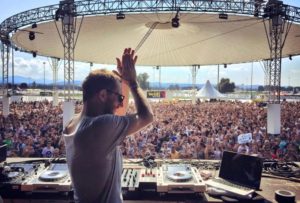 Set your dials for 2008 and a much loved contribution from Circoloco favourite Matthias Tanzmann.

Matthias Tanzmann is one of house music’s most resolute DJs. He’s been plugging away at the scene since the mid 1990s, releasing his first track as Mathias Tanzmann in 2000 and piloting his label, Moon Harbour through the choppy Beatport waters of 2000s minimal, late 2000s Frankfurt house, early 2010s new disco and current popular trends for big room tech house, emo desert sounds and battering techno.

He’s stuck to his guns throughout, crafting a reputation for high energy, percussive house that’s not too cool for school but not too grasping for the big ticket cheese board either. Much of his staying power can be credited to his sets on the Terrace for Circoloco. He is a much revered warrior on this tricky to remain on stage, battling the winds of change with a knack for unrelenting energy and crowd pleasing selections.

His mix for Ibiza Voice is our twelfth most downloaded mix, recording in 2009 and taking in stone cold classic cuts like the King Britt mix of Josh One ‘Contemplation’ or Losoul’s ‘Green Door’ alongside the big tracks of the day like the Radioslave edit of Danny Fido and Affkt’s ‘Points.’