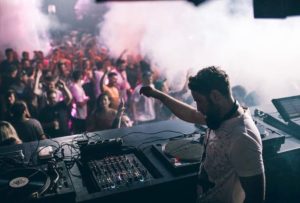 We turn the page back to 2011 to find Enzo Siragusa in the mix and intent on taking London clubbing up a gear.

London club brand and label Fuse enters 2018 as one of the strongest players in the vinyl house scene. Its spearhead Enzo Siragusa has in turn become one of the most in demand DJs operating between the poles of minimally inclined house and techno.

When Ibiza Voice first met Enzo Siragusa in the mid 2000s, however, he was one of London’s East London ever present rave soldiers, always out on a Sunday and hopping from one party to another. He started Fuse at London’s infamous raving venue, 93 Feet East, which was then in its rave heyday and also home to other noteworthy parties like secretsundaze, that would go onto bigger things as the decade progressed.

His Ibiza Voice podcast from 2011 was recorded a year before he launched the Fuse record label and two years before he moved the party to the nearby Village Underground where it boomed in popularity into a members only, UK raving institution. It has since become a global party brand, carefully executed by Siragusa and the rest of the tight-knit collective, that includes DJs and longtime friends and collaborators Rich Nxt, Seb Zito, Rossko and Archie Hamilton.

Its popularity can be largely credited to two things: its sound, for which the club has become synonymous with, and its reputation as a party by ravers and for ravers. Both are ever present on this mix, which captures the afterhours sound of East London in the early 2000s, collated by an expert in the field yet to make the moves that would define a chapter in time for clubbing in the capital and beyond.