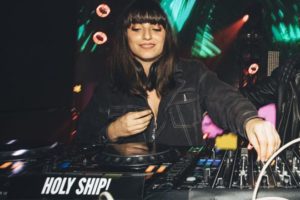 Holy Ship, the annual electronic party at sea, hosts a slew of artists from across genres for each sailing. For its 11th sailing, talents like The Black Madonna, Denis Sulta and Madam X were invited on board and brought into the ship’s programming.

During Madam X’s anticipated set on the journey’s final day on Friday, January 12, the UK star was placed between artists 4B and GLADPVCK on a “hip hop” party lineup. Despite the titled billing, Madam X took the stage to play her sounds of grime, drum ‘n’ bass, techno and an assortment of welcomed UK flavor to a packed room.

Sometime during the set, an uninvited guest by the name of James Earl grabbed the mic and turned down the fader to proclaim: “What is this shit? What’s happened to my hip hop room? Where’s my trap at?” He was quickly booed off the stage for his unwelcomed opinion and Madam X continued on, addressing the incident later on Twitter and Instagram.

“To the ass-wipe who felt the need to come on my set, grab the mic and slew my music for not being “hip hop enough” – you can jog on,” she wrote. “I am not responsible for incongruent programming. Although I was placed on the “hip hop” stage, I will always do me and play my shit. Never in all my years of DJing have I experienced such distasteful, tacky behaviour. Only want positive vibes when I play.”

A quick check on the official Holy Ship lineup confirms that James Earl was not an artist or a DJ playing on the ship or in the room hosting the “hip hop” party. Earl is listed on online film database IMDB as an actor with appearances on shows like musical sitcom series Glee, Scream Queens and a small stint in a 2009 flick about male cheerleaders called Fired Up!