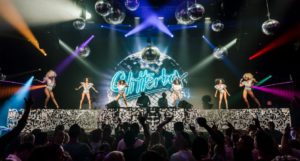 Hï Ibiza has responded to clubbers’ demands and realigned its ticket price structure for the forthcoming 2018 season. The locale has created a Super Early Bird ticket price of just €20 in a challenge to the prevailing rates on the White Isle.

The realignment was announced in tandem with details of Glitterbox’s 2018 residency. Following their debut 16-date run at the brand new club in 2017, the flamboyant extravaganza returns this year for 17 dates.