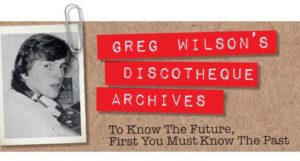 We’ve drafted in Greg Wilson, the former electro-funk pioneer, nowadays a leading figure in the global disco/re-edits movement and respected commentator on dance music and popular culture, to bring us four random nuggets of history; highlighting a classic DJ, label, venue and record each month.

Radio played a huge role in the evolution of club culture, the airwaves taking the music of the dancefloor to a much wider audience. Frankie Crocker was key to disco’s popularity via NYC’s WBLS, whilst UK presenters like Greg Edwards and Robbie Vincent in London and Mike Shaft in Manchester played a crucial role in helping popularise black/dance music.

First emerging on Michigan University radio and then the Ann Arbor based WAAM, he found his home on the R&B/gospel oriented WGPR. Johnson’s radio show broke down racial pigeonholing in music; with Mojo playing everything from Prince, who he was a huge advocate of, to Kraftwerk, from B-52’s to Michael Jackson, from Funkadelic to Art Of Noise, his playlist appealed to a large cross-section of the city. He’d move around other stations including WHYT, WCHB and Ohio-based WTWR, but his most popular period was 1982-85 at WJLB.

Under the influence of Mojo, DJs like Jeff Mills, Darryl Shannon, Delano Smith and Carl Martin would introduce these electro, new wave and post-disco sounds to Detroit’s clubs and help lay the foundations for a new scene to emerge. Initially anonymous, Mills would make his own name on radio at WDRQ as ‘The Wizard’.

Described by Juan Atkins as ‘an underground cult hero’, following on from the city’s famous Motown sound, Mojo’s show shaped the second wave of music the Motor City was about to become renowned for. Carl Craig has said, “Without The Electrifying Mojo, we wouldn’t have had Detroit techno the way that we know Detroit techno”. Mojo was the first to play proto-techno cuts like A Number Of Names’ ‘Sharevari’ and Cybotron’s ‘Alleys Of Your Mind’ (both 1981).

Given a free reign, Mojo would do things like play whole sides of an LP, intersperse shows with sci-fi soundtracks, create esoteric interludes with otherworldly streams of consciousness and implore his listeners to honk their car horns and turn on their porch lights in unison, which made his spread across the city more tangible.

Continuing through the ‘80s, ‘90s and the beginnings of the new millennium, The Electrifying Mojo would discuss social and political issues on his show, which he’d explore further in his poetry and prose book ‘The Mental Machine’ (1993), later lending its name to Detroit documentary ‘Cycles Of The Mental Machine’ (2008).

Born in London into a wealthy family, Chris Blackwell, then in his early-twenties, set up Island Records in late-‘50s Jamaica with engineer Graeme Goodall and producer Leslie Kong, having spent much of his youth in the then British colony, whilst travelling to England where he studied at Harrow.

Blackwell soon shrewdly decided against going head-to-head with the likes of JA producers Duke Reid and Coxsone Dodd, instead relocating to London and licensing his former competitors’ music to issue alongside his own.

His import business helped establish a UK network for Jamaica’s ska releases, and in 1964 the Island label hit the jackpot with teenager Millie Small’s ‘My Boy Lollipop’, a multi-million selling worldwide ska sensation.

Formed by Island in 1967, Trojan Records released a who’s who of Jamaican artists, ska/reggae a staple of Britain’s Mods and the music of choice for the freshly cropped skinheads.

In 1972 Blackwell’s love of Jamaican music was fully rekindled on signing the act that epitomises the label, The Wailers, fronted by the thoughtful and charismatic Bob Marley, destined to become a global superstar viewed as a reggae prophet/spokesperson of his generation. Blackwell co-produced the band with Marley between ’73-‘76 bringing a rock sensibility to their music and marketing – it was a masterstroke.

The first 3 albums from legendary disco diva Grace Jones were produced by remix don, Tom Moulton – ‘I Need A Man’ a US Disco #1, her powerful 1977 Edith Piaf cover, ‘La Vie En Rose’, the highlight. Her most enduring work ensued, backed by crack reggae riddim duo Sly & Robbie, club cuts ‘Pull Up To The Bumper’ (1981) and ‘Nipple To The Bottle’ (1982) included, whilst 1985’s Trevor Horn produced ‘Slave To The Rhythm’ was a global hit (Island also distributed Horn’s ZTT label – artists including Frankie Goes To Hollywood and Art of Noise).

U2 and Amy Winehouse were the label’s most celebrated subsequent signings. Island nowadays absorbed by Universal Music.

Located on New York’s Fire Island, and catering to an affluent gay audience with a discerning taste in music, mainly soul and funk, The Sandpiper was crucial to the evolution of New York disco, and also DJ culture in general, thanks to the ground-breaking mixtapes Tom Moulton programmed for its special parties.

In 1966, Gene Smith and Ron Malcolm opened The Sandpiper on the luxurious Pines Harbour – a restaurant in the daytime with dancing at night. Along with The Ice Palace, it would dominate Fire Island’s burgeoning nightlife throughout the ‘70s.

Really hitting its stride as a discotheque in 1970, The Sandpiper would become a prime component of New York’s emerging disco explosion. With one of the earliest Graebar sound systems it would attract up to 600 revellers.

Don Finley was the first DJ to make his mark there, but it was an innovative music selector who was never actually a DJ in the live sense whose Sandpiper legacy is most profound. Tom Moulton’s first steps to becoming the father of the remix began with a series of tapes he prepared for the venue during the early-‘70s, extending some of the tracks and linking them via the machine’s sound-on-sound function, as opposed to actually editing the tape. Having visited the island he felt underwhelmed with the continuity of the music played and proceeded to labour for 80 hours on what was, in effect, the first mixtape – its continuous nature geared to counter the dissipation of energy he’d noted on the dancefloor between tracks.

At first the tape was rejected with the ill-judged advice ‘don’t give up your day job’, but one night in a DJ’s absence it came to the rescue, consequentially causing a sensation. Further tape commissions for Memorial Day, The Fourth of July and Labor Day followed.

With previous music business experience in sales, promotion and retail, Moulton had diversified as a male model, but his Sandpiper tapes would lead him to extending dance records, securing an early success with 1974’s ‘Do It (Til You’re Satisfied)’ by B.T. Express, whilst introducing the world to the ‘disco break’ on his Don Downing ‘Dream World’ mix. By the end of the year his seamless medley of tracks on side one of disco queen Gloria Gaynor’s ‘Never Can Say Goodbye’ LP, marked the first DJ mix on vinyl, and in ’75 he’d create disco alchemy by serendipitously ‘inventing’ the 12” single.

Robbie Leslie, later of gay NYC megaclub The Saint, would first rise to prominence behind the decks during, The Sandpiper’s latter years, playing their closing party ‘The Last Dance’ in 1979.

Following a brief association with local Indiana label Steeltown, Motown catapulted The Jackson 5 into popular consciousness via four 1970 US #1s – ‘I Want You Back’, ‘ABC’, ‘The Love You Save’ and ‘I’ll Be There’. These afro-haired brothers, led by the youngest, 12 year-old Michael – a real pocket dynamo, complete with his James Brown moves – were an early-‘70s pop phenomenon.

As with Stevie Wonder, Motown had unearthed a rare musical prodigy – such a soulful voice from one so young was spellbinding. He’d also acquire a teenybopper following, which Motown targeted on launching his solo career; this running parallel with his role in The Jackson 5, who even had their own cartoon in ‘71/’72.

Although the hits kept coming, they were more likely to peak outside the top 10. Following two 1971 US #2s, ‘Mama’s Pearl’ and ‘Never Can Say Goodbye’, they waited until ‘74’s ‘Dancing Machine’ before achieving a similar placing.

Their final Motown flourish was a 1975 cover of the 1968 Supremes hit ‘Forever Came Today’, which topped the US Disco chart, but missed with the pop audience.

Moving to the Epic label in ’76, rebranded as The Jacksons, they employed the Philly Sound expertise of Gamble & Huff. Disappointingly the overall collaboration fell short, although it did deliver the family’s first UK #1, 1977’s ‘Show You The Way To Go’.

A scattering of their own compositions appeared on previous albums, but in 1978 they took the reins, writing all songs on the self-produced ‘Destiny’ with the exception of ‘Blame It On The Boogie’ (ironically co-written/originally recorded by Brit, Mick Jackson). It paid dividends, both ‘Blame It On The Boogie’ and ‘Shake Your Body (Down To The Ground)’ major club and commercial successes.

The multi-million selling ‘Off The Wall’, produced by Quincy Jones resulted (Jackson co-producing his own compositions). Bursting with hits, the title track, ‘She’s Out Of My Life’ and ‘The Girl Is Mine’ (with Paul McCartney) followed chart-toppers ‘Don’t Stop ‘Til You Get Enough’ and ‘Off The Wall’ into the US top 10. Despite 1982 follow-up ‘Thriller’ becoming the all-time biggest selling LP, many regard ‘Off The Wall’ as Jackson’s greatest musical accomplishment.