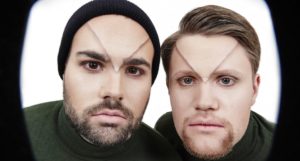 A blend of massive synth-lines reminiscent of their countryman Todd Terje, interstellar atmospherics and punchy percussion, their sound nestles somewhere between slow-mo disco and pop, but never sits still for more than a moment — a perfect fit to their label home, Belgium powerhouse Eskimo.

Check it out in full at the bottom of the page for truly intergalatic trip.

Last album you listened to in full?
“That must have been the Blade Runner 2049 soundtrack. The original Vangelis soundtrack is a big favourite of ours, and a hard one to match. It is a good thing the new one is a bit different, as well as keeping some of the essence from the first Blade Runner movie. It is growing on us. We love it when the music and movie sound FX melts into one and the same (like the motor engine sound in ‘Flight to LAPD’).”

Last meal you cooked?
“The last meal we made together was pizza. Magnus goes by the name ‘Magnus Mozzarella’ for a reason.”

Favourite club?
“When living in a somewhat remote country, when it comes to clubbing, it is a bit hard to answer this question. We had some great time in different clubs in Berlin and London (Corsica, Fabric, Tresor), but we’ve never visited any of them twice (so far). Locally, in Bergen, Østre has been an amazing small club for electronic music and art for years now.”

Favourite DJ?
“There are lot of great DJs out there. Our local hero is Bjørn Torske — ‘The Codfather’. He still amazes and inspire us with his playful sets.”

Favourite festive song?
Johannes: “That has to be the introduction melody of the Norwegian children’s programme, Jul I Skomakergata (translates to Christmas/Yule in Shoemaker Street). It always takes me back to the time we were dancing around the Christmas tree at my Aunt’s house.”
Magnus: “For me it is ‘Silent Night’ performed by Mahalia Jackson. Not just because of her out-of-this-world performance, but I’m also reliving my father’s attachment to this song. That’s some yule time magic.”

Who would you most like to collaborate with?
“Wouldn’t say no if Goldfrapp called us!”

Which cartoon character would you most like to be?
“The dream is having our own cartoon in the styles of Mézières and Mœbius, with stories of the two clumsy space cadets exploring the universe.”

Who is your biggest musical influence?
“404 not found. Impossible question. Too many influences: great music, people, art, nature… the list goes on.”

Tell us a joke…
“Mp3 to Wave conversion.”