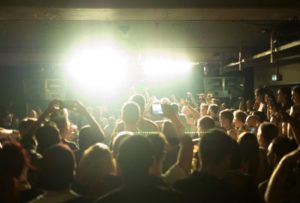 One of the UK’s best labels pays a visit and a Detroit legend reunites with an old flame; it’s another action packed weekend in Berlin.

Whities label boss Nic Tasker takes over Berghain’s brand new club room Säule as part of his label showcase. Joining him are Avalon Emerson and Minor Science, who are responsible for two of the most pivotal releases on his label. Whities has quickly become one of the UK’s most revered labels since it’s beginning in 2014 and is regularly touted by trendsetting DJs like Roman Flugel as being one of the scene’s most forward thinking imprints.

Robert Hood and his daughter Lyric.

If you have a thirst for the greats, Detroit legend Robert Hood should be on your list this weekend. After scoring big club hits like ‘Never Grow Old’ and last year’s remix of Radioslave’s ‘Feel the Same’ remix younger fans might know him better by his Floorplan alias. But those aware of his all time contributions to techno as Robert Hood won’t need any further persuading, particularly in the setting of one of his favourite haunts in Germany. Jus-Ed, Dana Ruh and Jenifah round off an exciting bill with some housier tones in the Globus room.

Prince Charles make it into our weekly pick again with an unmissable combination for Detroit Swindle’s residency. The Amsterdam duo will be going back to back with Ostgut Ton’s Soundstream and this will be the only back to back special Detroit Swindle have planned for their four month residency, so we are intrigued to hear how their styles blend.

Those who have found themselves within Arena’s small but perfectly formed space will have discovered that, contrary to the name, the club is as grimy and industrial as any of its fellow Berlin counterparts. Old engineering pipes and installations litter the top deck of the club, and a raw vibe resides on the dance floor. Combine the setting with the dark sounds of minimal legend Sleeparchive, and this party is about as Berlin as it gets. Massive Tip.

Anita Berber isn’t an obvious choice for tourists in Berlin, so if you want to avoid the hordes and listen to raw top knotch techno, we strongly advise a helping of Abstract Divison’s Dave Miller at this off-the-radar party. From the duo’s industrial beats to their faster paced techno grooves, each blend has a massive impact on the dance floor.