In Defence of Track IDs

In Defence of Track IDs 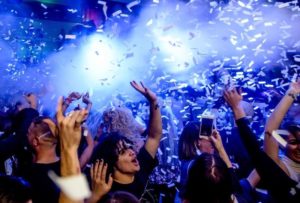 Track ID culture is hotly dividing dance music but we ask the question, what’s wrong with being so excited by a track that you need to know the name?

Slating people for asking for Track IDs seems to have become a popular pastime for DJs and the dance media alike. Jackmaster, Midland and Mixmag have all criticised Track ID culture in public recently.

And they are not without just cause. Track ID requesters can be annoying. They bother DJs in the middle of mixes. They pester DJs incessantly online and often react churlishly to those who reply to them.

And a huddle of nerds trying to video a DJ playing track instead of dancing, does not make a rave.

But DJing is at it’s very foundational level, another form of sharing music; playing tracks so other people can enjoy them too. Track ID culture is just another extension of that.

The knock on effects of Track ID fans are also just as important.

Sharing track information is essential for the survival of labels and many of the the producers who made the tracks in the first place. In the 70s, 80s, 90s and 2000s, DJ charts were one of dance music’s biggest promo tools. Record labels depended on their audiences finding their tracks via DJ charts. And chart entries were pooled together with other information to form bigger charts such as the UK’s Buzz chart.

For DJs, filling out your chart was one of the most important items on their weekly or monthly ‘To Do’ list.

This decade however, the importance of charts has declined. Unlike the late 1990s, when most dance music magazines carried a chart section in the back, charts have faded from the dance music press.

Store charts, like those found on Beatport or Juno, remain popular but are generally only posted by DJs sporadically, usually only when they have a release to promote and are not always indicative of the tracks the ID hunters covet most.

Technology has enabled the dancefloor to take matters into their own hands. A glut of Facebook groups now exist that are devoted to the identification of tracks such as The Identification of Music Group, which at the last time of counting, had 85 thousand plus members.

In the 2010s, track IDs have become an invaluable way for tune sleuths to find music and for labels and producers to make money. An ID of a Ricardo Villalobos play on YouTube for example, can elevate what might otherwise slip into obscurity as an unknown track, into a dancefloor hit. The UK’s Constant Sound were just one of many labels to find one of their tracks at the top of a sales chart after videos of Ricardo playing one of their tracks circulated on YouTube.

Those who slate track ID hunters forget that dance music exists solely because of enthusiasm. Enthusiasm is what links DJs, promoters, label owners and fans together. As a DJ, if you’re not enthusiastic about finding the most exciting music you can, surely you’re in the wrong job?

Isn’t it then unfair to criticise fans for being so enthusiastic about music, that they dedicate their time to hunting down and identifying the tracks they hear out?

Is wanting to know the name of a track and buy it so that you can enjoy it yourself and help the artist and label behind that track by contributing some money to their existence, really that much of an offensive past time?

At a time when record labels are suffering because of the overload of music being released and the rise of the download, surely they need all the help they can get in connecting tracks with their future fans?

There is a unwritten code of etiquette that is sadly lost upon some ID hunters that doesn’t help their cause. The quickest way to piss off a DJ afterall is to ask them the name of a track while playing and secondly, by either in person or online, omitting the magic word: please.

It’s also easy to get irked by that friend who doesn’t put in the hours digging and asks you for a swap nonetheless. DJs like Jackmaster have argued that ID hunters often lazily sidestep the hard grind of finding tracks by scouring record bins, back catalogues and obscure shops.

That’s an unfortunate side effect for sure. But how far do those DJs go up the industry profile ladder in the end? Track ID culture actually has the opposite effect. Those DJs whose tracks cannot be found often populate the track ID groups in far greater numbers. Track ID culture inevitably helps the profile of those DJs whose selections cause a stir of interest.

For DJs and fans alike, track IDs are often the starting point for discovering new artists, labels or scenes. It’s an example of dance music’s hive mind in operation, constantly regurgitating and recycling old music and ensuring that good tracks, old or new, rise to the surface.

In the age of endless Spotify playlists where listeners are surrendering the need to collect their own music in favour of putting someone else’s on in the background, Track ID culture should be applauded and not criticised.

We need more people hungry to find out the names of tunes, not less.