THE CHEMICAL BROTHERS ARE PLAYING AT AN OBSERVATORY THIS SUMMER

THE CHEMICAL BROTHERS ARE PLAYING AT AN OBSERVATORY THIS SUMMER 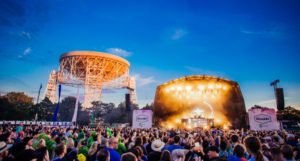 Bluedot Festival will be returning to Jodrell Bank Observatory in leafy Cheshire — the home of one of the world’s largest radio telescopes — for four days of science and music, it has been announced.

This year’s headliners will be The Chemical Brothers who will be joined by the likes of Flaming Lips and Future Islands for the four-day festival which blends world-class music alongside science talks held by some of the world’s most-celebrated scientists.

Elsewhere, there will be an orchestral performance of the BBC’s hugely popular Blue Planet from the Halle Orchestra set against the backdrop of footage from the awe-inspiring nature documentary on the opening night.

“Heading into our third year we really wanted to go above and beyond and we’re absolutely delighted to announce Blue Planet in Concert for our new Thursday night opening,” said Bluedot’s festival director, Ben Robinson.

“Our mission is to not only erode the boundaries between science, culture, art and technology but to also highlight the beauty and fragility of our planet Earth, and what a better way to achieve this by opening proceedings with such a remarkable and enlightening spectacle. It’s going to be truly incredible and a real festival highlight.

“To be able to offer to these curious minds the return of The Flaming Lips is one thing but to set the stage for The Chemical Brothers to showcase their innovative and ever evolving artistry as both musical innovators and purveyors of world class light and visual stage productions is a true honour and will be a weekend not to miss. The full line-up of musical acts for this year is truly spectacular with so many innovators and diverse sounds and shows throughout the weekend.”

For tickets and more information about the family-friendly Bluedot Festival, head here.