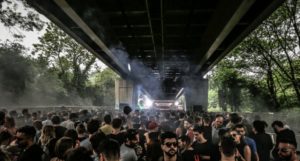 Junction 2 has announced a swathe of all-star b2b performances for its third edition, with the don Carl Cox going toe-to-toe with Drum Code’s Adam Beyer.

Both Cox and Beyer will also perform separately at the festival too which will be taking place at London’s Boston Manor Park on 9th June.

Ahead of the festival, Adam Beyer said: “It’s a dream come true. Playing back-to-back with one of my absolute heroes will be one of the highlights of my life personally as well as professionally”.

The festival has also secured an exclusive 6-hour set from Innervisions’ Dixon & Âme and have announced a cutting-edge b2b between Sonja Moonear and Nicolas Lutz.

Ahead of Junction 2’s return to Boston Manor Park next June, the festival will host two cross-country launch parties on Saturday 10th February 2018, taking place at Tobacco Dock in London and at Motion in Bristol.

Carl Cox recently helmed 2018’s first BBC Essential Mix where the don astutley combined tracks from the likes of Eats Everything, Riva Starr and Booka Shade alongside cuts from a host of newcomers including Tom Cole, Fabio Neural and Chris Coe.