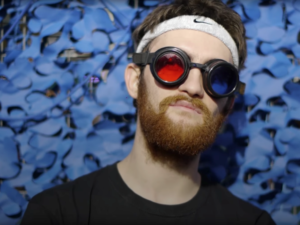 My event of the month is always incredibly difficult to decide, but this month it unquestionably had to be HYTE’s New Year’s Eve extravaganza located in the techno den of Berlin’s back yard, the breathtaking Funkhaus. This was a day where I found myself reminiscing on what had been a life changing year for me. 2017 was a year where I was blessed with new friends, both ravers and world-renowned artists, new festivals, cities and countries that before this adventure, I could only have dreamt of exploring. I was reflecting on all of this in my natural habitat, where I feel most at home – an industrial, stripped back, raw space that was full to the brim with hungry, passionate, ravers like myself. I was there to wave goodbye to 2017, with a line up that was practically unbeatable. This was going to be one for the history books, I was sure of it!

I had only nine hours to satisfy my need for techno, and the strong team of DJs that was expertly assembled by the events organisers certainly ensured that my satisfaction was fulfilled as I sprung into action after a warm welcome, and short tour around the venue from the HYTE team. Gregor Tresher was just concluding a very tidy warm up set that impressed all the early doors crew. Then the lethal combination known as Pan-Pot, took the reins and things really kicked up a gear.

When you are in the presence of performance after performance that completely takes you over, and alters your very perception of time, you know you’re having one of the best nights of your life. But you really know it when gyrating for a solid three feels like 25 minutes! Adam Beyer took over and once again raised the bar – it was without a doubt my favourite new years eve to date.

Unusually, for me, I stayed grounded to the same spot all night. The quality of this night really shone through when I realised several hours had passed and I still wasn’t tired, despite the levels of energy I had already drained, so move after move kept flowing through my arms and legs and it felt like I had the ability to power through carelessly! If I could replay this event, I would definitely, and for longer too… but this memory will last a lifetime, I am sure of that. So, HYTE NYE 2018 is already on the cards!

My first weekend of December was looking unusually empty so. However, this soon changed as my good friend Craig informed me that he was playing at Cream25, and before you knew it I was embarking on a 3 day rave adventure! The name of the event speaks for itself, with the legendary Cream brand celebrating an unbelievable 25 years of success. The location was a slight change-up from my normal raving, as it was being hosted at Butlin’s Minehead, but as you’ll know by now I always throw myself into the deep end with an open-minded approach.

The line up was full of familiar names, from Faithless to Haçienda originals and pioneers Graeme Park and Paul Oakenfold, it was a weekend of nostalgia for the many older generations that were in attendance. But don’t let the more long term and establishment names fool you into thinking this was attracting a strictly older crowd, as the age ranged from young to middle aged and no matter what the age gap everyone was firmly rooted to the dancefloor. The personal highlight for me, and another thing to tick off my bucket list, was pirouetting throughout the arena to Paul Van Dyk for the first time, and it was everything I expected. The trance icon embraced a crowd that would be considered large even for a man who has conquered festivals such as Tomorrowland.